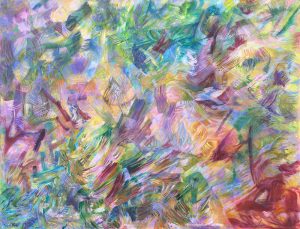 Vidho Lorville’s fine art work received rewards and fellowships from art institutions including the New Orleans Jazz and Heritage Foundation 2011, the Adolph and Esther Gottlieb Foundation 2006, the Joan Mitchell Foundation 2006 among others. Between 2005 and 2006, he was one of the selected artists for the studio space program of the Lower Manhattan Cultural Council, LMCC with an artist grant from the Andy Warhol foundation. In the summer of 2002 he was a selected artist participant of the Skowhegan Art School of Painting and Sculpture residency program.

Lorville’s art exhibitions across the US and abroad are subjects to positive art reviews by art critics from several establish publications. In New York, Vidho Lorville’s artwork was featured by NY1 news channel by reporter Stephanie Simon in a conversation with Winton Marsalis about the connection among different art forms. Vidho Lorville exhibited his body of work made in New Orleans, LA around this subject at Lincoln Center in response to Winton Marsalis premier musical composition entitled: “Jazz at Lincoln Center Brings Congo Square Vibe to Big Apple” in May 6th, 2006.” The New York Times article published an interview with Vidho Lorville about his work experience as a visual artist titled : “New Orleans through the prism of Art” by Joseph Berger in March 16th, 2006. The article featured Lorville’s art studio located in the Tribeca neighborhood in New York City with the Lower Manhattan Cultural Council, LMCC space program. Vidho Lorville had also published many essays about his artwork that were highly regarded by lectors of different social and news media.

The NY Arts Magazine in July 2009 published a text by Vidho Lorville titled “Unbearable Barrel.” The written piece was about a conceptual intent of a multi media and found object installation made by the artist over the issue of immigration. The artwork was made during a two months time frame of an artist in residency program at Le Chateau de la Napoule in the Azure Coast of southern France.

Journalist and HBO film editor Lolas Eric Elie will be the first American writer to publish an interview with Vidho Lorville for the New Orleans Times Picayune news paper titled “For Haitian painter art is a gray area,” in October 26th, 2001. The article was about the body of work of Lorville first solo art show in the crescent city that was currently on display.
In the following year, art critic Doug McCash of the Times Picayune, wrote an article about Vidho Lorville second solo art exhibition in New Orleans titled “Fantasy Paintings Contain Harsh Realities” in May 24th 2002.

The Gambit Weekly, another notorious New Orleans publication had published two consecutive reviews on Vidho Lorville solo art shows entitled: “Secret Messages” May 14th 2002 and “Different Environments” in October 30th 2001 both article wrote by writer D. Eric Bookhardt.
In January 17th 2010, the Washington Post featured Vidho’s article where he shares his personal opinions and hopes dealing with the possible harsh reality during the night of Haiti’s earthquake of January 12, 2010. In spring 2012, CARTS Magazine in New York City published an article featuring Lorville’s community outreach project in Haiti that is involving local artists doing hailing through the art program working with children in public schools and orphanages. In 2011, the program took the initiative to connect children of New Orleans and Haiti through the making of a public art project of a mural which documenting and sharing their respective experiences of a natural disaster survivors of these two places.
Vidho Lorville is currently living in the city of New York where he continues to make artwork and teach the visual arts in the city’s five boroughs.

Artist Vidho Lorville paintings exhibition for “Spectrum Miami 2019″ reflect on the commonality between alternative facts and virtual reality in the era of social media. The selected paintings by the artist for this art show highlights how socio-cultural debates enhance the quest of identity and authentic representation within multiculturalism environments. Vidho Lorville palette density relates colors composition to multiple shapes and functions that creates layers of screen that redefined the notion of space and place. His body of work visually displays the massive consumption of images and motion pictures in the first century of our third millennium.

Bibliography
THE WASHINGTON POST, “Artist Looking for his daughter After Earthquake in Haiti” by Vidho Lorville, Washington D.C, 01/17/2010

NEW YORK TIMES, “New Orleans through the prism of Art” by Joseph Berger, 3/16/06

THE TIMES PICAYUNE, “Artist’s Studio Open for a day” by Perry Kesprzak, 6/9/05

PUBLISHER: VIE AND ART COLLECTION, Featured in Haitian Art In The Diaspora by Michel Lerebours, 2002