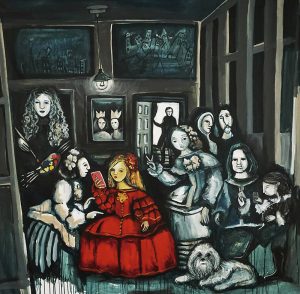 Artist Bio:
Catalina Rojas has redefined the concept of art. By intervening in urban places, the artist questions and puts pressure on the classic supports in search of a new place for expression. From her beginnings, Catalina has been continuously exploring new forms of expression, with the hopes of changing the traditional support of pictorial work from the canvas to large natural and urban places.
Through the “mural of light”, a term she herself coined, she proposes a new form of creating art, going beyond the easel painting in a magical act that transports the viewer to another dimension. The mural of light allows viewers to witness large artistic creations, projected in different public places that give them a distinct and spiritual plastic worth, as if the city and contemporary surroundings were the caves of yesterday.

Between 2008 and 2009 she lived in Michigan, Detroit, U.S.A., where she presented her works at the Expressiones Cultural Center in New London as well as at the I-Park artist enclave, where she was invited to hold a residence in order for her to develop a project for the intervention of the landscape —lakes and forests— with her paintings and drawings. She also executed an installation at the Tres Onas forest, on a ninety-meter tall araucaria tree extended on the bottom of a hill. All these works were prepared for the 2009 Environmental Arts Biennale.

In early 2011 Catalina Rojas inaugurated the Art of Light Museum, consisting of a nocturnal open- air gallery on the shore of the Mapocho river, thus turning it in the only river illuminated with paintings and drawings in the world. Overt ten millions people have visited it.

One of the elements that stands out in these recent paintings by Catalina Rojas, is the need to rethink her way of understanding the verb to paint from the history of art. Reason why, the artist takes as the first object of study one of the masterpieces of the Spanish painter Diego de Velásquez (1599–1660), entitled “Las Meninas”, canvas where she installs her own version of the scene as a comment to his work and the author in question.

Such proceeding in the art of C. Rojas, is not new in the brief account of local painting, since in the mid-seventies in the last century, Gonzalo Cienfuegos took as a point of reflection the work of Velásquez to give free rein to a series of oils, where the theatricalization of the characters, together with the quotations of what was painted by the Spanish artist, they made these paintings an intelligent social political comment to Chile during those years.

Unlike G. Cienfuegos, C. Rojas inserts today’s world and particularly the globalization in which we live to make this palatial scene, titled, “Meninas Millenials” (1.70 x 1.70 meters), a stage for the “Selfie” . Since he has intelligently taken each of the characters in the original painting and has integrated them into a scene where the infanta in the foreground is self-portraying, making us meditate on how the painting of past centuries was the predecessor of what today we can do with a “smart phone”, an aspect that highlights the authorship of the work, when painting mostly female characters in replacement of the masculine figures that populate the work of Velasquez.