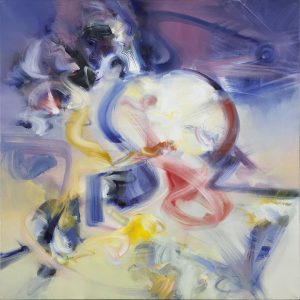 Artist Bio:
Ritchard Rodriguez was born and raised in New York City, studied at its School of Visual Arts under mentors Gilbert L. Stone and Jonathan Borofsky, migrated once west to Aspen Colorado for a duration of two years, invited to exhibit at its Jerome Gallery, 1st exhibit to date, then headed east to Berlin, Hamburg and Paris for a duration of eight years. Represented by art dealers Michel Ozenne in Paris and Jan de Maere in Brussels, he was among numerous activities featured as a solo artist in Paris’ first arrondissement, included in the FIAC at the Grand Palais and at the Auction House Elkaim, L’Isle-Adam.

“When I entered NY’s High School of Art & Design I aspired at being a comic-book artist upon graduation. By the time of my final term there, I bought a box of oil paints that changed my life for good. I was a realist for a good fifteen years, trained in the ways of the old masters by the late Gilbert Stone, primarily seduced by the Dutch. Prior to Europe I met Lisa de Kooning, friend of a friend’s friend, so became aware of her father, yet another Dutch artist. In fact, de Kooning, Kline and Joan Mitchell eventually fed my emancipation from the restrictions of academic realism, and in time I jumped off the cliff of a comfort zone with a hand glider of my own invention without regrets, towards my very own abstractions.”

Rodriguez permanently relocated early this year to Miami Florida, a town where he is too often “awe-struck with its sky’s cloud formations and colors”. He continues to exhibit internationally, his paintings collected throughout three continents, even enjoying the success of being presented among ten other artists who participated in Princess Stephanie of Monaco’s annual auction to raise funds for her charity, Fight AIDS Monaco. “His two paintings were bought by a Monegasque art collector at the auction in Monte Carlo in the presence of the Princess and her brother, Prince Albert II. Ritchard has a very particular and unique approach toward the canvas while painting. Each of his work is an emotional story that belongs to his heart and echoes ours.” — Marie-Laetitia Lesaffre (curator).

“I see my paintings as living creatures with shapes, problems and solutions that I address within a candid dialogue, stemming from pure spontaneity*, entering a space of concentration, rhythm, physical gesturing, and an understanding of where a work wants to go.”
*”…Spontaneity is, after all, total sincerity — the whole being involved in the act without the slightest reservation…” Alan W. Watts

2019 marks the 45th anniversary of Ritchard Rodriguez actively painting. “Despite years of experience that have included acrylics and pastels, I strictly work in oils, a versatile medium in which I can just about achieve anything, expressively working wet into wet, provoking the hues by employing numerous unorthodox techniques and tools, awed by the unpredictable reactions attained when maintaining my vision at the destination of my efforts, meandering or otherwise. Of late I’ve taken to working with the canvas flat on the ground, incorporating my body movements to compass desired strokes. I create by inspiration and what kindles most of my work is a title arrived at by unexpected circumstances, such as words in conversation, read in a book, a song, geography, meaningful historical phrases as of those from Old Latin, most recently the skies above Miami. I then feel compelled to work. The paintings shown here are from my completed series, ‘Magic, Quests & Miracles’, a notion of the 4th dimension suggestively expressed via abstract painting.”