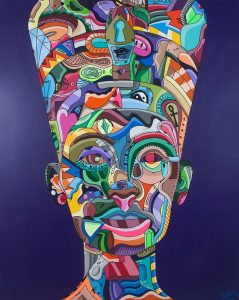 Artist Bio:
Edo is Infinite®! The self-taught multi-disciplinary artist, fashion, graphic, industrial designer, and model was born Eddie Santana White and has set his sights on being a force in the creative world. The Edo brand is known as Infinite Inception. Infinite meaning forever or timeless, and inception, from his favorite movie of the same name. Edo is about discovery, and within his work you can see art, within art, within art. Don’t expect to capture everything within a single viewing, rather, every viewing reveals something new, something different, something infinite.

Edo began his career as a designer in Chicago where he has worked with leading urban clothing brands, including Leaders 1354, Joe Fresh Goods, Treated Crew, and Fat Tiger. His digital exhibition “Infinite State of Mind,” was shown in Harlem, in September 2017, and he was featured at the Baltimore Gallery in Detroit. He made his debut as a painter during Art Miami/Art Basel in 2018 as part of the Pigment International Miami Reveal just one year after first applying paint to canvas.

His art has also been featured in corporate exhibitions for Hyatt International, LinkedIn, and Twitter, and he was a featured artist for the Chicago Culture Ball and the Pancakes & Booze Art Show. During 2019 he was exhibited at Columbia College Chicago, the Andersonville Galleria and Art in Motion Charter School.

Influenced by notable artists like Kanye West and Kid Cudi, Edo describes his work as imaginative and futuristic, following in the Afrofuturism canon. The Hyde Park Career Academy, and later attended Kennedy King College student dreamed of designing for brands and actualized that when he was selected to design for Leaders 1354. The businessman also oversees a clothing line called Emperion and is the co-founder of the graphic design and screen-printing company [blankcanvas]. He is expanding the Bronzeville space he co-owns called Escape Studios Chicago.

Edo White’s work ‘Infinite Grace” has over 100 hidden references to Queen Nefertiti. Visit us at Booth S641to see how many you can uncover.

Additional Info:
About Pigment International
PIGMENT-Intl ® is a multi-media arts collective redefining global arts, culture, and innovation. The organization is committed to creating new platforms for the advancement of the modern multi-cultural aesthetic in the visual arts. Pigment serves as a connector for emerging creators, collectors, curators, investors, and other stakeholders. It is a destination for art enthusiasts to experience customized and curated salons, events and exhibitions that spark dialogue and inspire those constituents. Pigment International is also the founder of Black Fine Art Month celebrated each October. Follow Pigment, Int’l on FB and IG.