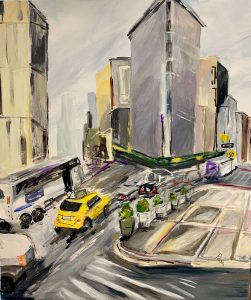 Artist Bio:
Peshi Haas is an established artist residing in Lawrence, New York. Since graduating from SVA in 2005, Peshi went on to have two solo shows in New York City. The first being an evening of success at Synagogue for the Arts. The show was titled “Urban Synagogues.” The second was held at the Edmund J. Safra Synagogue. The show was titled “Architecture: Past and Present.” The artist has also been included in group shows and private galleries in cities such as Brooklyn, New York, New Jersey and Jerusalem.

Peshi’s subject matter consists of architecture from around the globe. The composition that Peshi uses in her art is simple yet profound. Her color use is oft garish and her stroke is whimsical. She has been extremely influenced by Fauvism, German Expressionism and very much drawn to Chagall’s city-scapes during her schooling and early years in her painting career. While drawing and painting are vital to Peshi’s growth as an artist, traveling to countries abroad which are strong in architecture or walking the historical streets of New York are very crucial to the work that she produces. The artist will more often than not travel with her camera and photograph on site. Many times while traveling she will create charcoal drawings on site as well. She will hire historians to help her grasp the history and of course architectural beauty of the city at hand. She feels the need to have knowledge before she delves into her actual art of the local. Whether in California, Vienna, Prague, Monte Carlo, Rome, Tel Aviv or Miami, Peshi is searching for a perspective of a winding road or unique yet classic edifice that would appear most alluring to any art viewer. The artist constantly searches for new architecture in hopes of exploring it and expressing it via the medium of charcoal and then eventually paint on canvas. She has become well known for her archway painting of various ancient cities —the motif is a most calming subject matter for Peshi to draw and paint. More recently she has been commissioned to paint family estates and vacation venues as nostalgic art pieces for offices and residences.

She is an active member in various art groups and enjoys learning from other artists and historians. Peshi remains in constant touch with her esteemed mentors who are well known artist of NYC and Europe.

As Peshi paints in her Long Island studio, she combines her passion for architecture and very often her interest of Jewish history to create works of art which call out to a diverse art forum.