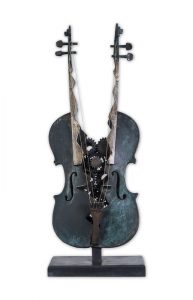 1997 Combines his passion for art and mechanic procedures and founded Machina Custom Cycles a company dedicated to build and design custom motorcycles.

June 2018 Exhibited in New York for the first time at the headquarters of Instituto Cervantes next to the well-known Spanish painter and illustrator, Enrique Ochoa.

December 2018 – January 2019 Exhibit in Miami City at The Hive at Brickell his work series The Second Life.

February, 2019 He is invited to participate in the artistic event Smylife Colletion Beauty Art V, in support of the foundation of Father Angel, Messengers of Peace, with an intervened venus that will be exhibited and later auctioned at the Thyssen-Bornemisza Museum, in Madrid Spain.

Future events: in October 2019 he will present his work at the Art Shanghai Exhibition 2019. In November he will exhibit a sculpture at the Thyssen-Bornemisza National Museum which in addition to being a Member again in Spectrum Miami that will be held during the Miami Art Basel in December this year.

For 26 years he has combined the branch of criminal law with artistic development.