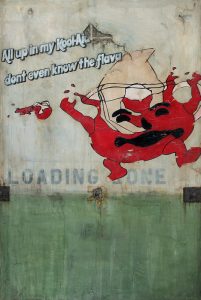 Artist Bio:
Justin Garcia is a time architect, influenced by the timeless connection between art and science studied by DaVinci. His lifelong fascination with aging and how change occurs over time led him to undergo a deep self-psychoanalysis through the abstraction of his first seven series spanning over a decade.

All of Garcia’s earlier works are pieces of a larger puzzle. To analyze, document, and assemble this puzzle, he took two years away from the art scene, several months of which he spent isolated in central Mexico. There, he mapped and constructed a theoretical model that captures the intersection of experience, awareness, and control across time and subject matter (Humanity’s Sustainable Infinite). In late 2015, he announced the completion and publication of his first book,One Ton Goldfish: In Search of the Tangible Dream, a retrospective of his seven series in which Garcia’s personal truth carried some universal meaning that lead to the creation of his theoretical model and latest works. After using his art as a way to explore how the constant stream of receiving and projecting information changes objects over time, Garcia began delving into the human psyche’s perception of time through the concept of an aging wall.

“Walls of Time,” his eighth series, focuses on the complexity of time and the human perception of it through the simplicity of aging walls as architectural structures representing reality. It is precisely the walls around us that bring a sense of solace when confronting concepts of time and its infinite effect.