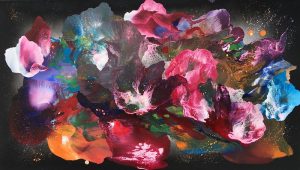 Artist Bio:
Joshúa Castañeda was born in Toluca, Mexico on January 22, 1996, at the age of 3 and a half they discovered in Sistema Montessori who is a born painter, at the age of 6 Master Luis Nishizawa receives it as his disciple, the only child with which he decides to work and teach. He’s the Master Nishizawa who confirms that Joshúa was born to paint.

In 2012 Joshúa took an art courses at the Lovre Museum School. A few months before 15-year-old sale of his first painting in Europe, having been approved unanimously votes by an art critical council of Le Bois d’Orion, Joshúa approves to be the painter on the cover of Rene Daumal et l’enseignement de Gurdjieff.

All of the above at the invitation of Basarab Nicolescu, the father of Transdisciplinity and Quantum Physicist. In 2016 he became an illustrator at the University of the Center for Research and Studies Transdisciplinity of America at the request of Angelica Castañeda Martínez who is the President of UNICIRET of America, Active Member of CIRET, Postdoctoral of Physics Quantum, PhD at Sorbonne 1 Paris. She decides to bring to Mexico the 21st century thought, for the first time in Mexico we live alongside Europe, for example Public Education arrives in Mexico with Benito Juárez after 600 years, today the Quantum Physics and Transdisciplinity are possible in Mexico – thanks to Angelica and Joshúa.

Additional Info:
Joshua is the Mexican Da Vinci thus recognized by the European Community. Joshua paints so that the geniuses of humanity stop living in poverty and injustice. Joshua paints because he’s believing in the Renaissance gives humanity. Joshua paints for human beings to remember and return to beauty as LIFE itself.