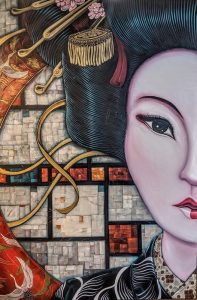 Artist Bio:
Tomori is a formally trained Japanese-American artist whose fresh, contemporary style gives new life to both Industrial Pop Surrealism and traditional Edo Period Japanese Art. Tomori’s Industrial Pop artwork is influenced by his time spent living and working in both New York and Miami, 8 and 10 years respectively. On the Industrial Pop art side, he focuses on vibrant, surreal interpretations of 50’s era Planes, Trains and Automobiles as frequent subject matter as well as smaller, viscerally urban texture pieces that often incorporate found objects such as bolts, rivets and metal plates. His pop works utilize a fish-eye lens distortion combined with a forced perspective of the subjects primarily in a post-apocalyptic New York City setting.

Notable examples of these characteristics are found in his 36” x 48” “Carmageddon” (A 50’s Buick Roadmaster in the city) and “The Aerosol Industrial Complex” (50’s era F-86 Sabre fighter jet “bombing” NYC with vintage Krylon Spray cans).

On the Japanese Contemporary art side, Tomori taps into his heritage as he focuses the Samurai, Geisha and abstracted Japanese Kanji characters as subject matter. There is a very historic look and feel through the use of strong, irregular texturing in his signature “tiling technique,” yet the colors, composition, and attitude of the subjects are fresh and engaging. He has coined his painting style as “Neo-Edo” art. A reference to the stylized art from the Edo Period (1603-1868) but with his fresh, contemporary evolved interpretation of this genre. Standout examples of this style are his 107” x 98” “The Grand Samurai,” 48” x 48” “Serenity” and the 48” x 72” “Bushido.”

While Brian has only officially launched his career as a full-time professional contemporary artist a little over a year ago, his vision and talent are unquestionable.

Tomori currently splits time between St. Petersburg and Miami Florida and he is actively exhibiting in Miami, Tampa, St. Petersburg and New York. He can be contacted for commission work at briantomorifineart@gmx.com. He is represented by Jason Perez Art for all existing work and limited edition prints sales.  Jasonperezart@gmail.com.