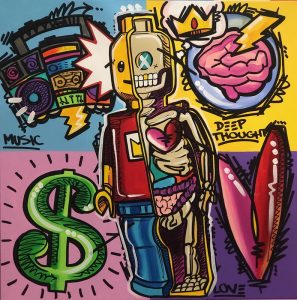 Artist Bio:
G.J Pierre also known as king redd is an Afro-Caribbean artist born on the small island of St.Croix in the mid 80’s . When he was three he came to the states and settled in Miami with other family members . Growing up as the youngest of 5 , his single mother raised him as best she could , bestowing upon him old fashioned values along with things like comic books and game consoles to hold his attention and keep him off the streets . It is from his upbringing as well as the life around him that he draws his artistic inspiration. He started by drawing superheroes , eventually graffiti and kept a sketch book with him always . In his early 20’s he turned his love of art into a profession as a tattoo artist and kept that up for 12 years . I’m early 2017 he met a few instrumental people In his transition from tattoo artist to visual artist. One of them being David Lebatard a well known miami artist who invited him to his studio in which the fire was lit . Lebo was encouraging and this led to Pierre completing his first painting in April of that year. Later that year Pierre met his art dealer Jason Perez in Wynwood . Perez has gone on to secure Pierre many sales and the two have a partnership that has led to Pierre showing work during miami art week (Art Basel) as well as shows at the SLS hotel and other venues . Pierre has also gone on to show and sell work at Wynwood shop a popular boutique in the art district as well as a mural curated by Lebo at the Confidante hotel . This fairly new but ambitious artist has done a lot and will continue to pursue a promising career in art . Stay tuned and watch this artist grow into an artist that we will all eventually know.