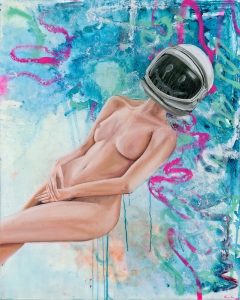 Artist Bio:
Diane was an avid competitor in the sport of eventing, an Olympic equestrian sport. She represented the United States in the North American Young Rider Championships in 2013 and 2015 bringing home team gold and individual gold. In early 2016, she had her sights set on qualifying for the Rio Olympics. Unfortunately, not far into the season a horse fell on top of her, completely severing her hip flexor causing extensive nerve damage. This injury ended her competitive eventing career. Unable to do anything physically active during her recovery, she turned to the canvas. Many of Diane’s works feature a theme of growth and decay, a balance of hope and cynicism representing the struggles she faced as she moved on with her life in the wake of the injury. Her artwork now resides in galleries around the United States and with collectors around the world, much of this stemming from joining the Jason Perez Art Collective.