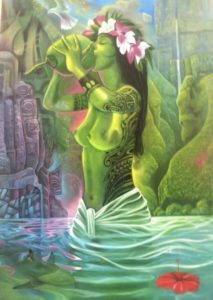 Artist Bio:
Paradise, and with it, born of it, an artist who captures its elation, serenity and knowing.
Behold the essence of the collection, and multi-commissioned French Polynesian artist Stanley Haumani.

Stanley Haumani’s work is the premiere and arguably one of the most recognized in the South Pacific Islands, with worldwide collectors in the USA and Europe showcasing his art. Stanley Haumani is highly noted for his government commissioned works which were selected nationally appearing on postage stamps of Tahiti in 1998 and in 2008.

Haumani’s ability to produce works using a mixture of hyper realism that combined with surrealism elements, evoke a grounded “psychedelic” expression, which is vivid and visually captivating self taught, he was born and raised in Moorea French Polynesia Tahiti in 1964. By the age of 8, he had begun to develop his natural skill and technique using oil and acrylic. Ever present in the playground of the islands and the ocean waters and it’s marine life, he found himself visually and audibly acutely aware of nature’s palette of colors and of its beauty. He and his siblings surfed the waves, climbed coconut palms, dived freely among colorful coral reefs, while frolicking for pearls along side a plethora of fish, shells and marine mammals. Inspired and prompted, he began to create through painting this vivid feeling of presence, life and its abundant joy. “I look out at the ocean at sunset, and I see there a ressemblance of the ‘tiare monoi’ that it shines like gold and the ocean becomes a kaleidoscope of colors.”

A master of painting dimension in a three level style, and using radian light, Haumani has captured the attention of critics, collectors, artist and the general public.

“He is a master at drawing you into the lushness of the natural environment with an unparalleled genius.”