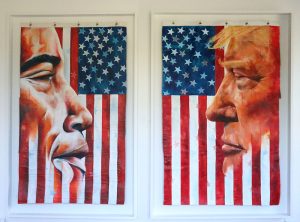 Michael Hamilton was born in Concord, North Carolina where he began to create artwork at a very young age. He studied Fine Art while attend Piedmont Community College and Methodist University and earned a degree in Fine Art.

As an artist he finds himself never knowing where the work is leading him but he knows when he has arrived. Creativity has always been a part of his DNA. Michael views art as a constant exploration of oneself and the objects, which evolve around him.

His style of artistic expression can be best described as an experiment with color mixing and abstract shapes to alter the human perception. Michael’s approach forces the viewer to entreat with each work of art. The artwork incorporates large amount of imagination and creativity. He is constantly pushing the edges of forms while maintaining the balance of positive and negative space within his work.

The bulk of his work was created at Michael’s art studio Hamilton Artistry based in Atlanta, Georgia.