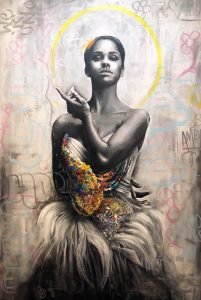 Artist Bio:
Award winning artist, Luis Peralta Del Valle was born in Nicaragua in 1980 and migrated to the U.S. in 1985. At the age of 13 he started painting graffiti murals in the District, Maryland and Virginia. A few years later at Bell Multicultural High School he began his formal artistic education, continuing his studies at the Corcoran College of Art and Design. In 2013 Luis was selected as the winner of the East of the River Distinguished Artist Award. That year he was also a finalist for the District of Columbia 28th Annual Mayor’s Arts Awards. These accomplishments preceded the presentation of the National Museum of Catholic Art and Library National Artist Award by Prince Lorenzo Maria De Medici in 2014, and his selection as the artist commissioned for the 2015 Beijing / District of Columbia Sister Cities Project. Del Valle is also the recipient of the 2015 National Museum of Catholic Art and Library Portrait Award. Luis received his first commission from the fitness franchise Body by Jake after his 16th birthday. Since then he has been commissioned by other businesses, foundations, public institutions, museums and private collectors to create murals, portraits, sculptures, and paintings of various themes. Luis has exhibited his works at various museums and institutions including The Embassy of Italy, The Frederick Douglass National Historic Site, The Historical Society of Washington DC, The Vatican Embassy, and the Frederick Douglass-Isaac Myers Museum in Baltimore, MD. Del Valle explores various subjects in his works. He paints family, friends, and everyday people as well as historic events and icons, such as Pope Francis, Nelson Mandela, Frederick Douglass, Roberto Clemente, and Celia Cruz. The murals, portraits, and landscapes Del Valle creates tell stories in vibrant colors and realistic figures. They draw the viewer into the long traditions of art and yet speak to the viewers’ modern sensibility. Luis continues to grow his unique personal artistic sensibilities while remaining an active leader in the metropolitan arts world.