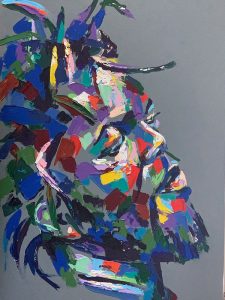 Artist Bio:
Jay Durrah is a self-taught artist from Western PA who has been sketching since the age of nine. His grandfather noticed his skills and asked him to draw the sketch in the TV Guide. It was an ad in the journal for an art institution that stated, “ If you can draw this, you too can be an artist Jay has a B.A. from Howard University in Political Science, Class of 83. Jay is drawn to creating portraits. He starts most portraits with the eyes for he believes they capture the essence of a person’s being. Jay’s burgeoning style strategically places patches of vibrant oil colors on canvas to form beautiful faces. The use of multiple colors represents the multiracial aspect of humans. No one is of a pure race; people have much more in common than the differences society tries to emphasize. Through his art, Jay would like people to focus on the commonality of humanity. This gifted artist had some formal training at the Corcoran School of Art and the Montpelier Arts Center. Jay has shown his work at the Pepco Edison Place Gallery in DC, Walton Gallery in Petersburg, VA, Sun Trust Banking Center in Richmond, VA, Annie’s Gallery in Maryland, New Orleans Jazz and Heritage Festival, The Essence Music Festival, the Lincoln Center in Manhattan, The Three Rivers Art Festival in Pittsburgh, the African Art Festival in Chicago, the Georgia Dome, Callanwolde Mansion and Piedmont Park in Atlanta, Capitol One Corporate Offices in Richmond, the Capital Jazz Fest in Maryland, Busboys and Poets Restaurant in Shirlington, Virginia, Howard University in DC, the National Harbor in Maryland, the Pittsburgh Playwright Theatre in Pennsylvania, , the Hyattsville Art Festival in Maryland, Artomatic in No. Virginia, DC and MD and Artscape in Baltimore, MD,the US Embassy in Rome, Italy in May 2016, a duo show in June 2016 at Gallery O on H in DC as part of the DC Jazz Festival’s Jazz In The Hood. Jay had is first solo show in Jan – Feb 2017, “Faces of Color”, at the Lamar Art Center in Barnesville, GA. Jay had his second solo show at Gallery O on H in DC in Nov and Dec 2017. Besides being the feature artist at the The Harlem Coffee Co. during Black History Month, Jay’s work will be displayed at the Prince George’s African American Museum and Cultural Center the first half of 2018, and in a group show, Art of Soul, at Walton Gallery in Petersburg VA this spring. His works belong to either private or public collections, both in the US and abroad. Beyond his commitment to art, Jay also stays active in the community, working with several programs geared to helping youth both locally and nationally.