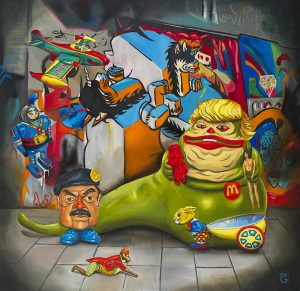 Artist Bio:
Galo Monge’s creative proposal is positioned as a pop, surrealist, baroque. It takes elements from Lowbrow Art such as its street art aesthetics, comics and the use of quotes with a sense of humor and sarcasm drawn from “public figures”. Just as this artistic movement originated, in his work; underground scenarios particular to urban suburbs are integrated, and they start weaving landscapes and oneiric imagery ripe with symbolism derived from psychoanalysis.

Academic techniques along with emotional states, present in the pictorial expression, come together as an inextricable dialogue to increase the baroque drama. The use of glazes and superimposed light and shadows to create the suggestion of spaces come together to reinforce the atmosphere of semi darkness and expressiveness as if each scene were a fragment of an almost theatrical setting.

The characters in his work are rarely human, but are rather extracted from the imagery of the collective memory of animated characters and toys which carry an unconscious mnemonic onus on the spectator. It is as if the work had been created for a specific age group just like in an advertising campaign for a particular product. In this case, it calls upon the memory of a generation similar to that of the artist, where material and aesthetic codes resonate in each spectator.