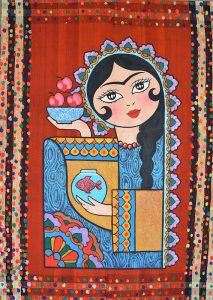 Artist Bio:
The German-Iranian Mohsen Tighbakhsh alias Tiba is represented at SPECTRUM Miami 2019 by an artwork from his Kilim-series where he uses handwoven carpets from Iran and also other countries like Turkey, Greece and North Afrika as painting surfaces. These Kilims are witnesses of ancient life forms and have, depending on their origin, special colors, structures, materials and ages. For his part also master of weaving and virtuos tattooist, Tiba creates spiralisticly contoured figures on these rare Kilims that contrast with the rough, haptic background by their colorful appeal and the lightness of form. Every motif finds its balance in the togetherness of a modern figuration and geometrical reduction on the one hand and the presence of tradition and history on the other.

Tiba was born in 1968 in Iran, where with the over-throw of the Shah in 1979 and the proclamation of the Islamic Republic by Khomeini an era of anti-liberal politics began. The Iran-Iraq War (1980-88) changed the lives of millions of people. Like others, Tiba fought as a 15-year-old at the front. In order to secure his livelihood after the war and to still be close to art, he learned the restoration of antique carpets and textiles. In 1993, he left Iran to realize his visions as an artist.
In addition to his talent for drawing and the urge for artistic creations, Tiba was fascinated to master tattooing from an early age on – the artful shaping of the human skin and the body. Since 1996 in Germany, he pursued this dream through self-taught learning. In 2006, he opened his own tattoo studio in Berlin and now counts some prominent people among his clients. The professional success as a tattoo artist made it possible to set up his own atelier. This was the initial ignition for his development of unique artistic techniques and motives. 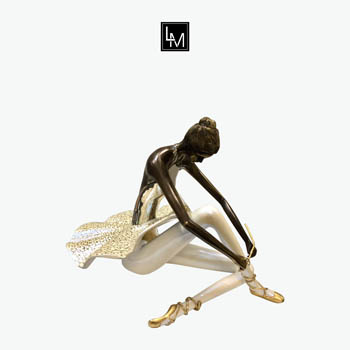