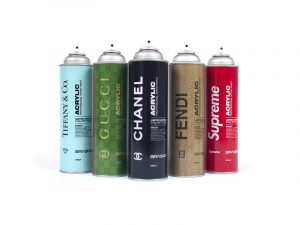 Artist Bio:
Brandalism has been a long term project devised by Antonio Brasko, as an in depth study of the impact street art has on the world of fashion. Employing the existing brands, their signature nuances and spray cans, Brandalism is an experimental exhibit investigating the dual perspective of the graffiti and fashion bond from designers point of view.

Brandalism has already gained notable reputation, being featured in some of the foremost street art magazines and galleries as well. Although this is not the first presentation of the concept exhibition, this edition contains certain novelties in content and design alike.

As an established name in the design world, Antonio Brasko draws most of his inspiration from the world of urban street art and freedom that it proclaims, and shapes it up in attractive, vividly colored artworks.

Brandalism is a study on the influence of street art and graffiti in the fashion world. Through the use of brand marks, iconic colors, and spray cans, Brandalism seeks to reintroduce the ideology of vandalism, branding and fashion from an experimental art perspective.