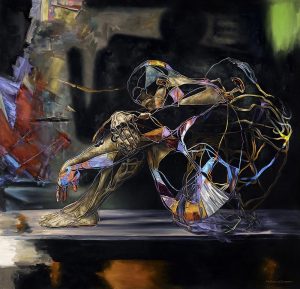 Artist Bio:
Born in Tel Aviv, Israel in 1963, Natan, from an early age began to exhibit an interest in design and drawing. As he began to refine his craft while working in some of the more prominent graphic design studios in Tel Aviv, he concentrated on painting images of urban life and its inhabitants. He received his formal art education in 1982 from the American Institute of
Art, studying with the master painter Yitzhak Holz. Natan began to travel and study throughout America and then Australia. While living in Australia he opened a Fine Art gallery and a glass art studio. During that time he practiced painting abstract art as well as designing and creating sets for television shows in Melbourne.

In 1995 he returned to his roots, settling in Israel and began depicting the daily life of the religious community in Israel, focusing on the spirit of Jerusalem. His paintings reflect the uniqueness and special character of Jewish neighborhoods and their inhabitants. He has exhibited his paintings in Tel-Aviv, New York, Miami, Melbourne Australia and Jerusalem.