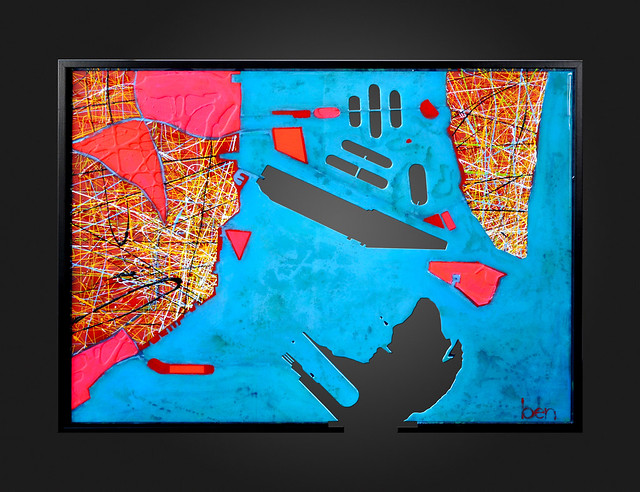 Above: “Miami” by Ben Joyce

When the Google team created Google Earth, they wanted to give users a bird’s eye view of the world. If you’ve ever fooled around with it, you’ve discovered that you can “fly” anywhere on earth and see satellite imagery, maps, terrain and more. It’s a cool way to view your favorite city, and for Ben Joyce, it’s a springboard for creating art. Says the artist:

There is great beauty and intrigue in the layout of a city—from your everyday drive to work, to the historical creation of the streets, to your personal relationship with the town.

At first glance, “Miami,” shown above, might seem like a colorful interpretation of the city’s essence—which it certainly is. But there’s also a strong geographical component to this painting. Using Google Earth as a starting point, Ben has actually mapped out the structure of the city’s landscape. You can see how things progressed below:

The artist has coined (in fact, trademarked) a term for his creations. “Abstract Topophilia™” combines the “love of place and the structure of landscape one could travel through” and encourages the viewer to connect to cities on a more visceral, personal level. It also makes for some compelling art.

Google’s Group Product Manager Lior Ron certainly thought so when he happened to see Ben’s art at the Sausalito Art Festival in 2011. He was even more thrilled to discover that Ben was using Google Earth as a diving board for his creative process. He was particularly taken with Ben’s interpretation of San Francisco:

The color scheme, brush strokes, and the open frame prompted my imagination freely to think about San Francisco and what I love about this city. What a wonderful way of visualizing spaces! 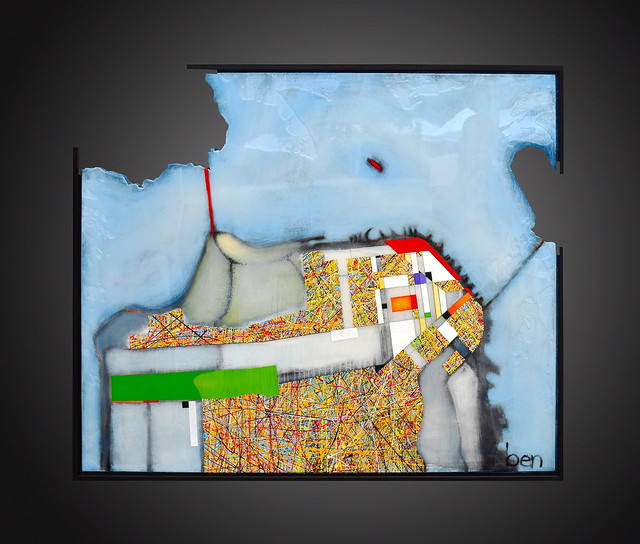 Lior and the Google Earth team invited Ben to create an annual 6-month exhibit in their corporate headquarters, which he has done for a few years now. He also exhibits widely across the US, from New York to Miami, Chicago and San Francisco. He has created private commissions for some of the biggest celebrities and most prominent corporations across the globe, and he recently completed a project, fittingly, for a private 737 Boeing Business Jet.

We’re thrilled to be hosting Ben at SPECTRUM Miami this December. Meanwhile, check him out online at: benjoyceart.com